I love a good excuse to travel. This trip to Belgium came about entirely due to an earlier trip – when I went to Manchester for the Bronte Society conference last year.

One of the speakers at that conference, Helen MacEwan, is the founder of the Brussels Bronte Group, and she had mentioned to me the dates of their upcoming events. Saturday April 1st was a double lecture and Sunday April 2nd was one of their guided walking tours of Brussels. What better excuse to book some flights and a couple of extra days to sightsee?

So after our lovely couple of days in Bruges, I made my way to the Universite Saint-Louis (managing to order my breakfast in French, hooray!) and listened to Helen deliver a lecture on Charlotte’s legacy in Brussels, and what the Belgians thought of it. It was a wonderful, very interesting lecture – Charlotte is not known for her kind remarks about Brussels and, in fact, said some quite nasty things about Belgium and the Belgians. And of course, she was struggling with the agony of unrequited love while staying here – Monsieur Heger, a married man, ran the Pensionnat where Emily and Charlotte were staying and was the object of Charlotte’s affections.

Both Villette and The Professor were heavily inspired by Charlotte’s experiences, and both novels are filled with thinly-veiled autobiographical detail. Charlotte and Emily lived in Brussels between 1842 and 1843. Charlotte was there for longer – Emily was far more homesick, and refused to go back after returning home for Aunt Branwell’s funeral. The girls had originally gone to Belgium to gain a proper education in French and perhaps German in order to open their own school back at Haworth. Helen has written extensively and brilliantly on the sisters’ time in Belgium and I would strongly recommend her book The Brontes in Brussels.

We broke for lunch and I ate mine (ordered in French again!) in the Botanic Gardens overlooking a pond. There were the tiniest ducklings I had ever seen, as well as tortoises, two very self-important mallards, moorhens, and even a small marsupial that might have been a water vole or a rat…I’m not actually reading a Bronte novel at the moment. I’m getting through L.M. Montgomery’s backlist and am up to Rilla of Ingleside (yes, reading it for the first time – shame!) I was thoroughly enjoying it, while still managing to get distracted by the menagerie of animal life around me.

After lunch we rejoined for a talk from Sam Jordison focusing on the Brontes in the public eye. This turned into a discussion of Haworth, and why the village made it into a series called Crap Towns that Sam has written about the worst places to live in the UK. He made a few points worth noting though – Haworth used to be such a health hazard, that it is no wonder the Brontes didn’t live longer. Now the town that killed them is cashing in on their legacy! It’s a harsh viewpoint, but an interesting one.

After the talk a large group of us went to the pub where I had a proper Belgian hot chocolate, before I met up with Sean again. We took a quick excursion to Waterstones to buy Helen’s book and then went back to Bier Circus for dinner – it was so lovely we just had to revisit. On the way home, Sean bought me a proper Belgian waffle – they are best with no toppings because the dough they are made with is so good on it’s own!!

The next morning it was the guided walk around the Bronte related places in Brussels. It started out the front of the Chapelle Royale, the Protestant Church of Brussels. Charlotte and Emily worshipped here on Sundays. It’s in the Place du Musee, which also houses the site of a former art salon that Charlotte attended. From here, we walked up to the Place Royale and the Parc de Bruxelles, both of which Charlotte would have been very familiar with, and both of which appear as disguised locations in Villette. Down the Belliard steps, just across the road from the Parc de Bruxelles, is the former site of the Pensionnat Heger. It has been completely demolished, and nothing remains, but the research by Helen and others has placed it almost exactly. A plaque was mounted in 1979 to mark the location. We finished up on Rue Villa Hermosa, one of the only streets left that would have been there in Charlotte’s time, and used to lead directly to the Pensionnat.

We had lunch in the garden of the Belvue Museum in the blazing sunshine and chatted, trying to keep ourselves from snoozing in the unseasonable warmth. Then Sean and I made two more Bronte pit stops – first, to see another, less legal plaque that was put up in honour of the Brontes about fifteen years ago and never removed, and second, to see the inside of the Cathedral of Saint Gudule. This enormous church was where a desperate Charlotte made confession on the night of September 1st, 1843, despite not being Catholic – another event that made it into the pages of Villette. 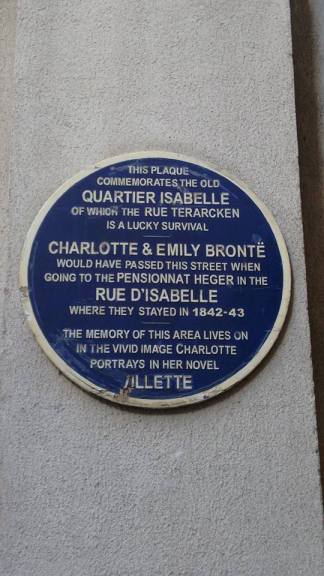 Afterwards, we had time to kill and gorgeous weather, so we drank more beers and tea, sat in the sun, ate frites and a massive meringue-and-cream confection, and eventually moseyed to the airport. Despite the holiday being busy, I really did feel rested afterwards. Perhaps it was the sun, or the beautiful scenery that did it. I would go back to Belgium in a second, regardless.